When Parkland Health & Hospital System in Dallas replaced its 61-year-old hospital with a new state-of-the-art campus across the street in 2015, staffers transferred patients to the new facility by wheeling them across a sky bridge that connects the two buildings.

While the move sounds simple, it required extensive planning, training and IT involvement every step of the way.

The new 862-bed, 2.1 million-square-foot Parkland Memorial Hospital is twice the size of its predecessor and features all new equipment and technology, including virtual desktops and mobile devices for communication. To prepare for the move, hospital officials held practice sessions called “day-in-the-life events” every Friday in the months prior to the grand opening.

“When you have major changes to infrastructure, layout and workflows, it’s important to do tabletop dry runs of patient care in the new facility,” says Matthew Kull, Parkland’s senior vice president and CIO. “Each department went in and worked with the new building. We always paired them with IT analysts to make sure that as lessons were learned, we could respond quickly and update systems accordingly.”

As healthcare providers expand, many are replacing aging hospitals with new, innovative buildings designed to better serve their growing communities and increase operational efficiencies. To successfully relocate, hospitals must implement a strategy that includes three key steps: planning for the new space, training staff for the new environment and moving patients safely.

“It’s not difficult to move from one spot to another, but it takes a year-plus of planning, if not more, to make it happen,” says Alice Wainwright, who specializes in healthcare facility transitions as senior associate vice president of CallisonRTKL, an architecture and design firm.

Technology helps to facilitate moves while also ensuring continuity of care. As patients are transferred to a new site, their electronic health records are updated and move with them. Staffers communicate with each other via cellphones or two-way public safety radios. Command centers with key leaders, including clinical, operations and IT personnel, monitor computers and a video wall providing real-time updates.

Hospitals not only must educate staff on new workflows, equipment and technology, but they should also rehearse the actual move at least three times, including one full practice session with volunteers posing as patients, ambulances transporting the volunteers to the new facility and a fully staffed command center overseeing the operation, says Virginia Schneider, CallisonRTKL associate vice president. 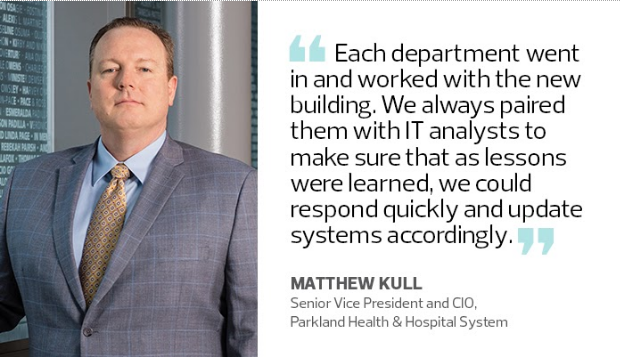 Parkland officials began planning for the move 18 months before moving day. The IT department trained employees on new technology and held regular user group meetings with staff to ensure tools and applications worked as needed.

The new $1.3 billion hospital equipped clinicians with ruggedized Zebra MC40 mobile devices, which allow them to text each other securely, access patients’ electronic health records and receive alerts from patients when they press a nurse call button or their vital signs go out of normal range.

The IT staff also standardized on VMware Horizon Enterprise and Dell Wyse zero-client devices to deploy 3,800 virtual desktops in patient rooms and in the hallways. The hospital, which has an in-house data center, features Cisco wireless access points and Ethernet connections throughout to support Philips IP-based patient monitoring systems, TVs and Cisco phone systems and a real-time location system to track patients and ensure their safety.

The technology was installed about a year before the move, and IT staff refined and tested it during the user group and day-in-the-life events. “We got a lot of the lessons learned out of the way early,” Kull says.

Parkland opened the new hospital in August 2015 and moved patients over three days. The most critical patients were transported by ambulance, but nearly all of the 626 patients were wheeled across the sky bridge. The move went so well it was completed 16 hours ahead of schedule, Kull says.

“Sometimes the buildings they are leaving are old, so it’s a challenge to find a communication technology that works in both facilities,” she says. “Walkie-talkie radios or cellphones could work well in one location, but not another, so it’s important to have a backup.”

Last November, in Buffalo, N.Y., the 185-bed Oishei Children’s Hospital opened, replacing the 125-year-old Women & Children’s Hospital of Buffalo. Officials transferred 125 mothers and children to the new $270 million facility in about 12 hours. To do so, hospital executives and staff used two-way radios to communicate, with cellphones for backup. They also created multiple command centers — including separate satellite IT setups — to oversee the relocation, says Cletis Earle, senior vice president and CIO of Kaleida Health.

Each command center contained large video screens that provided real-time updates from multiple data sources, such as systems management software and business intelligence tools. Hospital leaders could also view security cameras outside each facility so they could track patients between buildings.

“It allowed us to view various components of the operation, from general help desk tickets to environmental services, transportation, engineering and surgical operations,” Earle says.

When Sanford Health opened its new $494 million, 284-bed Sanford Medical Center Fargo last summer in North Dakota, it transferred 66 patients from its hospital in downtown Fargo to the new campus, which boasts a children’s hospital and trauma center.

With 400 staff and volunteers involved, the hospital moved patients to the new campus in eight hours. Teamwork, communication and preparation were key, says Director of Operations Caryn Hewitt.

The hospital began training staff on the new technology six months before its July 2017 move and practiced the actual event six times. “That gave our staff confidence that this would be an easy thing to do,” Hewitt says.

Staff used two-way radios to communicate and alert everyone on the team both when patients left the existing hospital and upon arrival at the new site. A nurse and a respiratory therapist accompanied infant and adult intensive care patients on ambulance rides.

The command center was open around the clock the day of the move and for three days after. The hospital, which typically has four in-house IT staffers, had 25 IT people on hand for support the first two weeks.

“It went very smoothly” Hewitt says. “It was a long, intense day, but it was also very rewarding.”